This is always a fiercely contested race with the best distance runners from across the South of England competing. Medway & Maidstone AC had 2 teams competing. Aldershot Farnham & District AC took the team gold, with Tonbridge AC taking silver and Cambridge & Coleridge bronze. The race saw some very strong runs on the hilly course from the front end runners, but Medway & Maidstone’s A team still managed a creditable 30th place out of 99 teams. With the first 25 qualifying for the National Road Relays in 2 weeks time, their placing should provide the club with an entry as several B teams don’t count leaving them the 23rd A team. The B team was 61st.

With the two girls’ team entered having to face the early wet and windy weather conditions they performed well. The U17s girls finished in 32nd place with a great first leg by Charlotte Young, 11:45 followed by Alex Baker-Jones 13:55 and Kerry Dewberry 14:05. In the U15 Anna Palmer 12:28, Erin Hughes 15.01 and Ciara Harrop16:25.25 finishing in 63rd place. 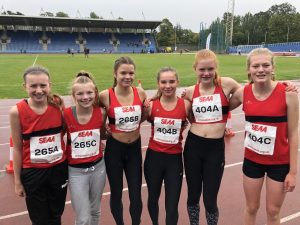