It was a great day for the M&M Under 13 girls with every athlete earning themselves a medal. It was started with Grace O’Connell, Ruby Towler, Abbe Clarke & Sarah Watmough picking up a great bronze in the 4x200m, which was then matched by Mia Colyer, Lily Crossley & Abigail Royden doing the same in the 3x800m. Then came the turn of the 4x100m team with Evie Cameron, Megan Currier, Olivia Laws & Princess Asemota who went one better, picking up the silver.

There was more medal success in the Under 15 girls as well. The foursome of Olivia Harrison, Michelle Yalekhue, Mia Franklin & Victoria Onuegbu earned another bronze in the 4x200m. The 4x300m races saw Erin Hughes, Katie Rothery, Maya Marriner & Keira Rose gaining  another silver for the team.

There were no medals for the U13s boys. However, the 4x100m team of Jake Foster, Stanley Cook, Oscar Mas and Cameron Isaac narrowly missing a place in the final. With the majority of the U13 boys team being first year athletes in this age group, I’m sure will be back next year challenging for the medals.

The Under 17 Men’s Team took full advantage of their home track with the men collecting gold in all 4 relay disciplines; 4X100, 4X200, 4X400 and 3X800. Outstanding performances from Conor Murphy, Ben Townend, Harry Osborne, James Butcher & Alex Donnelly, who were all double gold medal winners on the day.  The U17 Ladies followed the men winning Gold in the 4X300 (Zara Edeleanu, Charlotte Young, Lucy Maunders & Abigail Waters), and a Silver in the 4X100. The U 20 & Senior Women’s Team were also on fire collecting gold in the 4×100 (Elle Wastell, Lucy Hope, Emma Giles & Eleanor Callaghan-Inge), and winning a silver in the 4X400 relay. 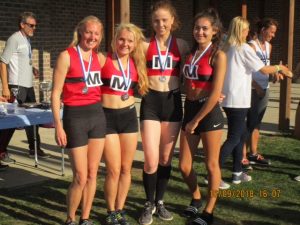 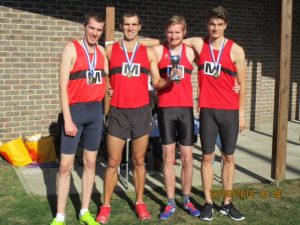 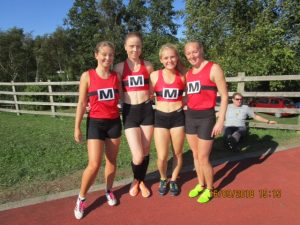 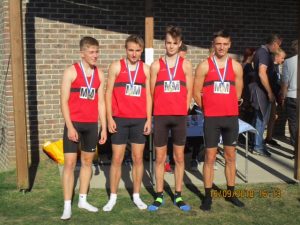