10 athletes from M&M competed as part of a 70 strong Kent Schools team at the English Schools Athletics Championships in Birmingham. The so-called “Olympics for school age athletes” is held over 2 days and is the 4th largest annual single sport event in the world. The standards are incredibly high, so winning a medal or making a final is major achievement and a list of past winners reads like a “who’s who” of British Athletics.

Competing in the Junior Girls Discus, Zara Obamakinwa recorded a big throw of of 37.79m to take gold, while in the Senior Boys Shot Putt, Jack Royden won a bronze medal with his longest putt of the competition measured at 13.47m.

To match the medals won in the throws, Ellie Turner won a bronze medal in the Senior Girls 100m with a time of 11.92 into a slight headwind and then ran the second leg for the winning Kent 4x100m relay team. These 2 medals together with her silver over 200m from last year, give her a complete set in her final year at this competition.

(With thanks to Steve Munday for the report) 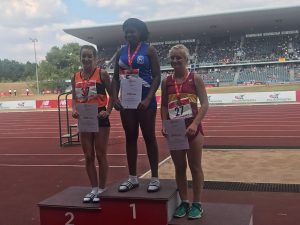 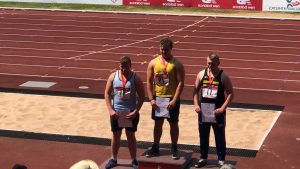